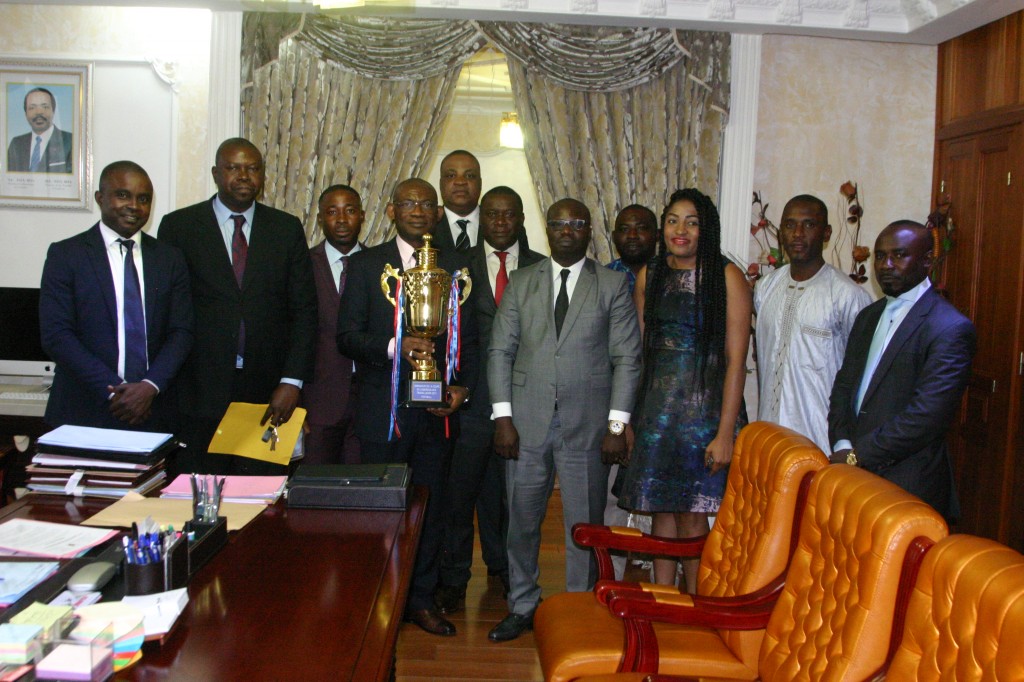 The 2nd edition of Cameroon Cup organized by Cameroon Workers Sports Federation (FECASTRA) ended on the 07 October 2017 in Edea. The final of this very popular championship pitting ARMP versus DGB-FOOT, representing the Ministry of Finance in this prestigious corporate tournament. Though a very tough match, the DGB team distinguished itself and humbled the ARMP team to a 3-0 defeat, to the utmost satisfaction of Cyrill EDOU ALO’O, DGB.

It is worth mentioning that the ARMP team approached the game with a lot of confidence, oblivious of the fact that DGB-FOOT was still bitter about the defeat they suffered from them in the group stage. Within the first fifteen minutes of the game, DGB-FOOT shook the ARMP net for goal number 1. The first half ended with DGB-FOOT leading 2-0. During the second half, DGB-FOOT cemented its victory by scoring the third goal, following a hard trick from BITOUTOU (team captain).

Notwithstanding the euphoria surrounding the victory, it is necessary to sojourn on the success ingredients of the DGB team, which translate the management vision of the current Director General of the Budget.

Inculcated by the DGB upon his assumption of duty, the players were galvanized by the winning spirit preached by the Head Coach. From the onset, the Director General of the Budget integrated sports in his managerial strategy, quoting the famous Latin phrase: “Mens sana in corpore sano,” meaning a healthy mind in a healthy body.

According to the players, despite their victory during the first edition in Kribi (2016), there was a remarkable improvement in administrative and financial supervision under the auspices of Mr Monsieur Hamadou Blaise, an Inspector of Treasury working at the Sub-department of General Affairs (SDAG). Concerns of actors were catered for in view of the performance approach. The Directorate General of the Budget did everything to enable the players give the best of themselves and thus win the prestigious trophy for the second consecutive time.

The DGB coach ensured discipline and chastised acts of insubordination which would have hampered team spirit and compromised the chances of victory for our torch bearers.

In addition, the statistics further magnify the profile of our team. In effect, our team played 3 matches in the group stage and the final, scored 11 goals and conceded none. This denotes the DGB defensive solidarity as well as its offencive prowess.

In the aftermath of this brilliant performance, the players presented the trophy to the Director General, a football lover who received the victory with a lot of pride and joy. In addressing the players, he conveyed the congratulations of the Minister of Finance. He also saluted their bravery, determination and fighting spirit as well as exhorted them to be uncompromising when it entails defending the colours and values of the Directorate General of the Budget.

Like a good General and in order to remobilize his troops for future battles, the DGB expressed the wish for more victories by his teams in the various platforms for budgetary actions. The Director General saw in this victory a triumphant entry on stage. He is fond of saying: “the higher level does not forgive,” in a bid to spur and galvanize his staff.

The climax of this wonderful victory was during the handing of the trophy and medals to the DGB team by the President of the Republic, H.E. Paul Biya on the day of the Cameroon Football Cup final.

In a nutshell, this trophy has been celebrated by the Director General and his entire staff in the most befitting manner. One may say that the DGB success train has been set on motion, it clears its road inevitably to a horizon which brightens as the journey progresses.