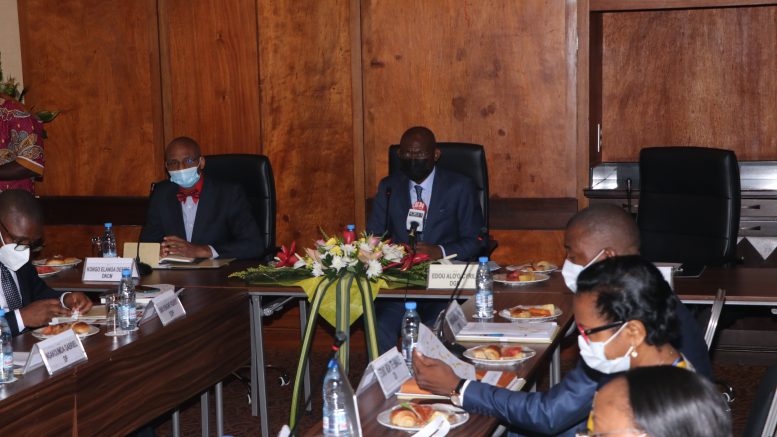 On Tuesday 15 June 2021, the Yaounde Hilton Hotel opened its doors to participants in the third management dialogue of Programme 274 “State Budget Management”, for the 2021 budgetary year. On the agenda, the review of the activities of the Global Plan of Public Finance Management Reforms (PGRGFP) included in the Annual Work Plan (AWP) 2021, and the evaluation of the implementation level of the recommendations of the Head of this programme, resulting from previous management dialogues.

Under the leadership of the Director General of the Budget, Mr Cyrill EDOU ALO’O, who is also in charge of the said Programme, the session brought together all the stakeholders who work for its performance. The meeting was attended by all the action managers, the Management Controller accompanied by his network of referents, and the managers of the 274 programme up to the rank of Sub-Director.

After welcoming all the participants, the objectives of the management dialogue were the focus of the programme manager’s opening remarks. These were regular monitoring of the performance of Programme 274, for which the annual mission letters with the 2021 AWP were signed at the beginning of the year. In addition, the respect of the directives defined by the Minister of Finance for the year 2021 so that the activities included in the AWP are carried out properly, which is a guarantee of performance. Talking about the activities of the PGRGFP, he specified that their implementation concerned only those included in the AWP 2021 for Programme 274.

Taking the floor to respond to a question, Mrs Goma Flore, Sub-Director of General Affairs, was asked to continue with the presentation of the Internal Control Implementation Plan within Programme 274.

In this section, the plan for implementing internal control within the programme was submitted for validation. This plan, which has been validated and will be implemented until 2022, will consist, among other things, of drawing up the code of ethics and conduct for staff, drawing up a risk map, defining the function of “risk manager” and developing an internal reporting system.

Evaluation mission of the Global Plan on Public Finance Reform

The Director General of the Budget, in charge of the Programme 274, gave the floor to Mrs. Sophie BOUMSONG, Head of the Budget Reform Division to brief the last evaluation mission of the PGRFP for the three-year period 2019-2021. The Head of Division highlighted the following activities: the operationalization of the State’s budget nomenclature, development of budget accounting, implementation of internal budgetary control and implementation of the commitment plan.

Following this, the Head of Programme 274 took the floor to urge his staff to be more zealous in the accomplishment of their tasks, and to put in place a wider division of labour, in order to effectively and efficiently achieve the objectives that are incumbent on them. In the same vein, he insisted on the fact that the Heads of Action should permanently develop a participative managerial approach at the level of human resources with the aim of detecting talents but also of identifying the less capable staff in order to help them to upgrade. He also announced that a training centre would be set up in the near future within the programme 274.

Following all this, the working session was closed by its chairman to the rhythm of applause, the result of a working meeting that certainly left no one unmoved.