State budget management: Officials meet within the context of the traditional management dialogue to monitor the roadmap of Programme 274 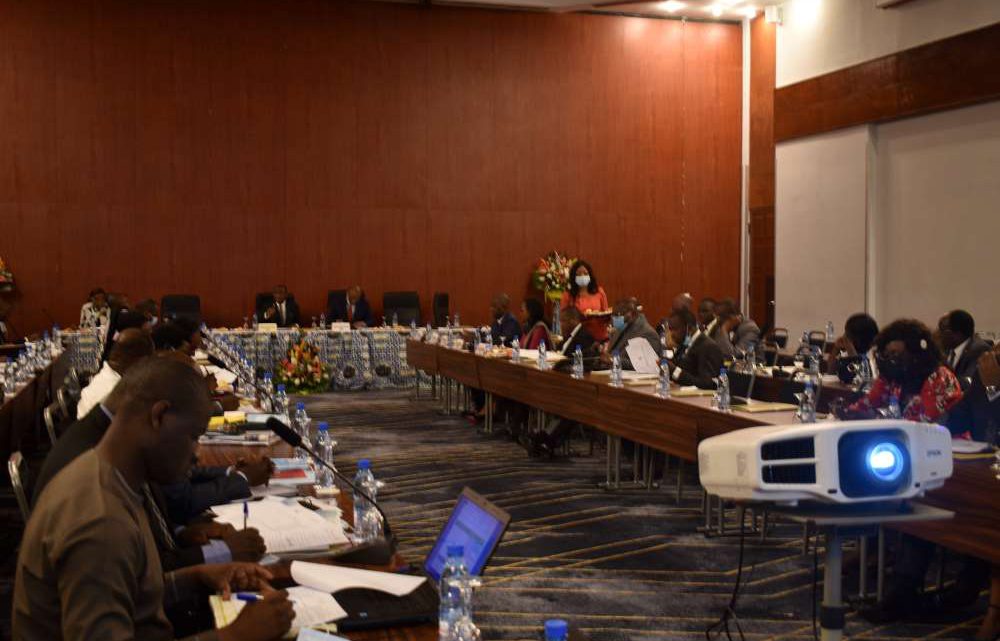 The management dialogue is a forum for discussions, evaluation and projection set up within a programme in order to ensure the permanent monitoring of the state of achievement of its objectives and, where necessary, the development of corrective actions. Thus, in his introductory remarks, the Director General of the Budget made a point of recalling the purpose of this meeting which is not only to follow up on the roadmap assigned to Programme 274 “State Budgetary Management” by the Minister of Finance, but also to assess the implementation level of the recommendations of the previous management dialogue of 15 June 2021, concerning the same programme. During the meeting, the responsibilities of each actor were also recalled.

It should be recalled that Programme 274 is one of the four budgetary programmes of the Ministry of Finance, set up with a view to coordinating Government actions in the modernisation of the processes of preparation, execution and monitoring-evaluation of the Finance Laws. Its objective is “to ensure the adequate preparation of finance bills and the efficient execution of public budgets“.

It is structured in eight actions mobilising the interventions of four MINFI structures, namely the Directorate General of the Budget, Department of Standardisation of Stores Accounting (DNCM), Forecast Division (DP) and the National Centre for Computer Development (CENADI).

Thus, the Programme’s management controller, under the watchful eye of actions managers, presented the implementation level of the activities of the Annual Work Plan (AWP), except for the activities of the General Plan for the Reform of Public Finance Management (PGRGFP) whose scrutiny is scheduled for the next session.

The Head of Department of Personnel Expenditure and Pensions, in charge of action 3, gave a briefing on the Practical Guide to the Processing of Salaries and Pensions in Cameroon’s Public Administration. He indicated that this document could be used as a manual of procedures for the personnel working in the field of pay salaries pensions, as well as a guide for the users of the public service. Its distribution had begun in the ministries and should continue in the devolved services as well as with users. He also recalled the availability of irrevocable transfer certificates which are now available in the regions. The action manager specified that the communication aspect to inform users is taken care of by the Communication Division of the Ministry.

On the other hand, the assessment of the 2021 Budget Orientation Debate (DOB) presented by the Head of the Budget Preparation Division, Action 2, made it possible to note that beyond the success of the event, it is necessary to make some improvements in the future, in particular with regard to the timeframes for submitting documents to Members of Parliament, in order to allow everyone to appropriate them before the debates. In his opinion, it is also necessary to ensure that the recommendations made are taken into account in order to guarantee the usefulness of the BOD.

Action 4, led by the Control, Audit and Quality of Expenditure Division (DCOB), reported on the holding of the Budget Execution Conference, the first of its kind, while noting that the budget execution situation to date shows that only 25% of the budget has been executed; According to the Head of the Budget Reform Division (DREF), who moderated the conference, this should prompt us to strengthen the sector support that the Ministry of Finance provides to other ministries on a daily basis, through its representatives, financial controllers and public accountants.

Although adjustments have been made to some actions, the discussions from all this led the DGB to commend his staff and urge them to continue in the same vein. He also noted that in view of the general rate of actions carried out so far, thus 56%, “we can congratulate ourselves for being on the right track, but it is necessary to remain focused on the work plan in order to reach the 100% achievement rate by the end of the year“.

The recommendations made at the end of the meeting are of several kinds, namely the preparation of a presentation of the parliamentary platform in August, the mention of the DGB website address on the service stamp, the start of work on the Green Tome, the provision of the draft instruction relating to the setting up of the internal audit committee to action managers, The need for a new budgetary nomenclature to be drawn up and the need for the DGB to be involved in the implementation of this new nomenclature was also discussed.

The meeting ended on a celebratory note which highlighted another aspect of performance, excellence and development: sports. To this end, the DGB/Football trophy was solemnly presented to the Director General, who did not fail to commend the men’s football team of the Directorate General of Budget. Congratulations were also addressed to their technical and administrative staff, with a recommendation to the Sub-director of General Affairs to extend it to other sports disciplines involving women with a view to applying the gender approach.