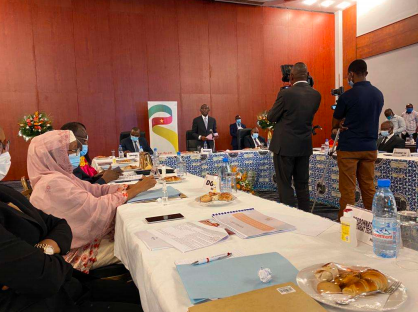 From October 21 to 23, 2020 was held at the Hilton Hotel in Yaoundé, the training seminar on Administrative Drafting in English Language.

Chaired by Mr. Cyrill EDOU ALO’O, Director General of the Budget, this meeting was attended by the Deputy Director of General Affairs of the General Directorate of the Budget (DGB), Departmental Financial Controllers of the North-West and South-West Regions, representatives of the Regional Financial Controllers of the said Regions, managers and staff of the central services of the DGB invited, as well as expert trainers of the Ministry of External Relations.

In his opening remarks, the Director General of Budget welcomed the participants especially those coming from the decentralized services and expressed his gratitude to the Minister of External Relations who designated some senior officials of his Ministry to lead this important training. For the speaker, this seminar is part of the training strategy of the DGB staff whose implementation was disrupted by the emergence of the pandemic of COVID-19 and the barrier measures enacted by the Government. He continued by saying that this training follows the promulgation of Law No. 2019/019 of December 24, 2019 on the promotion of official languages in Cameroon which enshrines the equal value of the two official languages of Cameroon, namely, French and English. Hence the need to strengthen the capacities of Anglo Saxon speaking staff in Administrative Drafting in English so that they can serenely fulfill their missions.

To do this, the DGB called on senior MINREX officials, especially those of the Commonwealth Directorate, to provide this training. The objective is to ensure that English-speaking staff master the rules of style and presentation in the preparation of administrative acts and documents in English. As such, the DGB urged participants to be more serious and selfless in order to fully benefit from this training as they will be called upon to share the knowledge acquired with those who were not invited to the seminar.

At the end of this training which lasted three (03) days, the participants received certificates and some recommendations were formulated, namely: