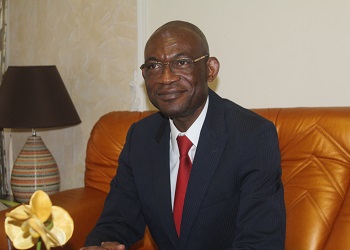 From September 20 to 25, 2020, was held in Ebolowa the 4th phase of a cycle of capacity building of Financial Controllers and staff of the Division of Budgetary Control, Audit and Quality of Expenditure, which is part of the implementation of the training plan for staff of the Directorate General of Budget.

Chaired by Mr. Cyrill EDOU ALO’O, Director General of the Budget, this meeting was attended by the Head of the Division of Budgetary Control, Audit and Quality of Expenditure, the Deputy Director of General Affairs of the DGB, 32 central Financial Controllers, expert trainers and officials of the Ministry of Finance invited.

This training session was marked by the unexpected visit of the Minister of Finance, who, while passing through the city of Ebolowa, was keen to talk to the Financial Controllers about the skills and attitudes to adopt in order to effectively support the structures to which they are placed.

The work in Ebolowa therefore made it possible to present the thirteen (13) training modules ranging from the general framework of public finance management to budgetary procedures, including the role of the Financial Controller in the PPBS chain, the State budget nomenclature, the role of the Financial Controller in the public contractualization process, internal control in public entities, taxes and duties in the budgetary procedure, control of pay and pensions, external audit, ethics and deontology in the control and audit of public budgets, administrative drafting and archiving in financial control, optimal use of PROBMIS. These modules were contextualized with respect to the target audience, which was essentially composed of Financial Controllers in the ministries.

At the end of the seminar, the participants made some recommendations, namely: